The first step in planning your Monterey Bay swim is to secure a date (or window) with a boat pilot.
Once you do that, please complete a 2021 Solo Swim Application and contact MBSA so that we can support you with documenting your swim. We are here to SERVE YOU! Interested in swimming a 6 person relay? 2021 Relay Team swim Applications.

If you are wondering why you should contact MBSA when planning your solo or relay Monterey Bay crossing, read our commitment to swimmers.

Did you know the first Solo marathon swim of Monterey Bay was completed by Cindy Cleveland in 1980 and would not be repeated until 2014?

On August 29 and 30, Brad Schindler of Folsom CA became the 9th known person to complete a solo marathon swim from Santa Cruz to Monterey. This also makes Brad the 3rd known person to successfully swim the Bay following marathon swimming rules (aka English Channel rules). This means Brad swam from shore to shore continuously with no supportive contact wearing nothing but a swim suit, cap, and goggles. Brad encountered cold overnight temperatures, cold water, and jelly fish stings, but managed to keep his stroke in tact and made it to Monterey in a total swim time of 15 hours, 17 minutes, and 22 seconds.

On August 28, the 6 person relay team, CRUZers, completed the 25 mile trans-bay relay from Santa Cruz to Monterey in a time of 11:30:35. The team consisted of Joel Wilson, Cyndy Hertzer, David Lederman, Tesla Profumo, Dan Besocke, and Chris Tainty. The swim was piloted by Brian Althaus on Catamaran Gemini (aka Sweaty Sheep). The swim began at 4:30 am in very calm water, but by mid morning the wind had increased to 15+Knots with 20 knot gusts making for some very challenging conditions. The team persevered and finished strong just before 4:PM. 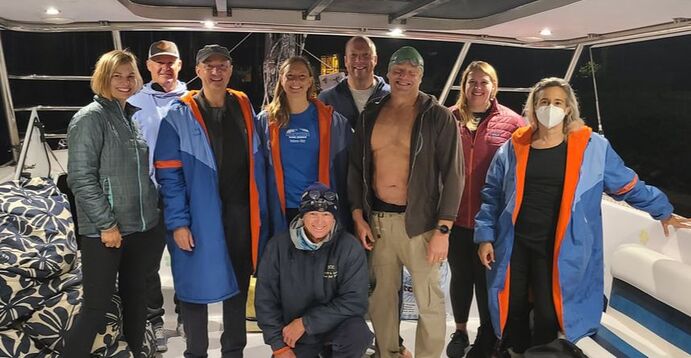 On Friday August 13, 2021, Joe Lock set a new course record for the MBSA 20k Pier to Pier to Pier route in a time of 5:27:51. Joe swam from Capitola to SC3 to Mile Buoy to Cowell Beach and back. The swim was piloted by Nomad Sailing Charters. Michelle Lower was crew. Conditions were smooth for all but the final 5k of the swim. Water temp ranged from 57 to 60 over the course. During the swim, Joe was visited by a pod of curious and friendly dolphins.

On Saturday, July 31, Kim Hedges completed the 20K Pier to Pier to Pier in a time of 8:00:13. She swam from Capitola to SC3 to Mile Buoy to Cowell Beach and back. The swim was piloted by Nomad Sailing Charters. She had Lisa Amorao on the RIB for crew and Robin Rose was observing for MBSA. Then, on August 23 Kim became the first person to complete the newly established MBSA Waverider 25. She swam from Capitola to SC3 to the Waverider Buoy and then up to Natural Bridges, making a U-turn and turning the way she came back to Capitola. (Note: This swim can also be completed as a one-way trip.)​

Thursday July 8th at 10PM, Sarah Roberts entered the sea at Seabright Beach, Santa Cruz and began her overnight swim to Monterey. She felt a few mystery bumps in the night and a couple of Sea Nettle stings to keep here alert, but she swam without complaints all night and was rewarded with smooth water and a beautiful sunrise. Sea conditions were ideal until roughly 10:30 Friday morning and eventually whipped up to 13 knots as she approached Monterey for the finish 25 miles later at San Carlos Beach on Friday afternoon. Her swim time was 16 hours, 17 minutes, and 42 seconds. Water temperature hovered around 54f for most of the swim. The swim was piloted by Nomad Sailing Charters and Sarah's crew were David Roberts and Kirk McKinney.

On June 6, 2021 Marisa Lovos, from Monterey, completed the 20k Pier to Pier to Pier in a time of 6:40:42. Marisa swam from Capitola to SC3 Buoy to Mile Buoy to Cowell Beach and back. The swim was piloted by Nomad Sailing Charters. She was supported onboard by Amanda Jennings as crew. Water temperature ranged from 57 to 59. Near the end of the swim, about 1.5 miles south of Capitola, Marisa was treated to a Humpback whale show. Several humpbacks, including a mother and calf, surfaced, waved large pectoral fins, and breached.

On June 18, 2021, Brad Schindler, from Sacramento, completed the 20k Pier to Pier to Pier in a time of 6 hours, 56 minutes, and 53 seconds. Conditions were perfect with flat water, sunny sky, and water temp between 58 and 60f for most of the swim. Brad swam from Santa Cruz to Mile Buoy, to SC3 to Capitola, then returned the same route to Santa Cruz. Brad negative split the swim. Brad was visited by a pod of Risso's Dolphins during his swim.

On June 12, 2021, Alice Ma swam from Santa Cruz to Mile Buoy, to SC3, and on to Capitola. Alice fought a strong E to W current just off Pleasure Point, but persevered to reach Capitola in a time of 5 hours and 20 minutes.

On April 23, 2021 Sarah Roberts, from Redwood City, kicked off the Monterey Bay 2021 Marathon Swim Season with a brisk 20K swim in 51-52f water and overcast skies. She swam from Capitola Beach South to round the SC3 Buoy. She then headed West and further out to sea to round the Sea Lion covered Mile Buoy, and then onto the Cowell Beach. Sarah then reversed the course and swam another 10K back to Capitola. Total time from start to finish was 7 hours, 5 minutes, and 15 seconds. This swim was piloted by Nomad Sailing Charters. View the swim here.

​On September 22, 2020 27-year old Catherine Breed, from Pleasanton CA, set a new speed record across the Monterey Bay. She completed her record-breaking solo 25-mile marathon swim from Santa Cruz (Seabright Beach) to Monterey (San Carlos Beach) in a time of 12 hours and 42 minutes. The Swim was piloted by Nomad Sailing Charters.

​The previous record set in 2014 by Patti Bauernfeind.

​About 1 week later, the same swim was completed by Joe Zemaitis, from Arizona, in a time of 13 hours and 29 minutes.